71 Kākāpo chicks have now survived through to juvenile age in 2019 – far surpassing the previous high of 32. Overall kakapo numbers have now hit 213 – the highest in over 70 years. You can support the great work by the Kākāpō Recovery Programme by adopting a bird here. Or, if you want to offer something more, you could follow Topflite team member Ruby’s lead and apply for volunteer work on Whenua Hou Island. As Ruby says – it will be two weeks that you’ll remember for a lifetime. Does your dog smile?

Ok, so apparently dogs don’t actually smile. Scientists have come up with a range of theories why, with most focusing on the idea that dogs are trying to manipulate their human companions into doing something. Some boffins say there is ‘zero data’ that shows dogs smile. We’d say there’s zero data that they don’t. We’ve seen happy dogs and would argue it’s much more natural than what science may say. And after all, don’t you smile at others to encourage them to be happy? It’s competition time! Share a photo of your happy dog to our Facebook page this month and there’s a chance you’ll make them even happier – we’re giving away two special dogtastic prizes!

Hard on the heels of the giant penguin fossil in North Canterbury comes news that one of the world’s oldest bird species has been found at the same site. The recently discovered Protodontopteryx ruthae fossel is 62 million years old. It would have lived here soon after the fall of the dinosaurs, when New Zealand was tropical and the sea was roughly 25°C. This species of seabird was thought to have evolved only in the northern hemisphere until the find. We love that (like the penguin) the fossil was discovered by amateur palaeontologist Leigh Love, who named the species after his wife, Ruth. 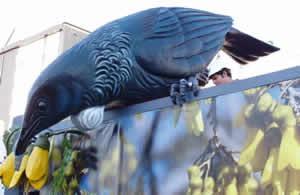 After three years stuck on a nest somewhere (or in storage, probably), Forest and Bird’s giant tūi sculpture is back on the roof of their new Victoria St office. Four metres long and two metres high, Izzy is watching over the city once more, a silent guardian welcoming ever-growing numbers of its family back to live in Wellington.